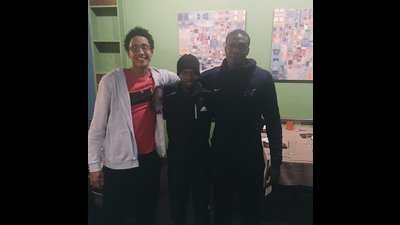 Three former high school teammates will don the same jersey once again in 2017.

Eric Parrish, a 6'6" wing from Sunrise Christian, has committed to play for the Akron Zips. He fielded interest from Middle Tennessee State, Valparaiso, UCF, and UTSA prior to his commitment.

Before enrolling at Sunrise, the Houston native played high school ball for the Panthers of Cypress Springs High School. Little did he know that during his sophomore year at Cy-Springs, he was playing with two of his future college teammates. Antino Jackson was a senior guard for the Panthers that season, Emmanuel Olojakpoke a junior forward. This past season, Jackson was the second leading scorer for the Zips, good enough for All-MAC honorable mention. Olojakpoke redshirted.

Parrish got to meet up with his former Panther teammates on his visit last weekend.

"Having four other Houston guys on the team and everyone else felt like family also. So taking the visit felt like a family reunion."

Cy-Springs is not the only Houston area high school represented at Akron. Two other Houston natives, Ty Dalton (Second Baptist) and Daniel Utomi (Westside), also play for the Zips.

The Akron to Houston pipeline was strengthened and maintained by assistant coach Charles Thomas.

"When Coach Thomas started recruiting Antino, he saw the potential in Emmanuel and Eric," recalled Cy-Springs head coach Sam Benitez. "As a freshman at Akron, Antino exceeded expectations. I believe that opened the doors for Emmanuel and Eric. It's not a secret that basketball in Texas has really blown up, especially in Houston. The staff at Akron has done a tremendous job recruiting our area."

Parrish earned CFSID All-District Second team honors his junior year and First team honors his senior year, along with All-Academic honors both seasons. He was ranked as the 17th best high school senior in Texas by Vype.com.

During his senior season, he received interest from South Dakota, Texas State, Sam Houston, Eastern Kentucky, Stephen F. Austin, and a handful of D2s. Parrish decided to do a prep year at Sunrise Christian Academy in Wichita, KS following his graduation from Cy-Springs.

"I felt like I needed to prepare myself one more year for the next level and I felt Sunrise was the best place to do that."

Parrish will spend this coming year honing his skills at the prep powerhouse.

"I feel I'm great at playing off the ball, a slasher, streaky shooter, good passer, coast to coast player, good defender, and able to make plays on the wing. I look to improve my overall game but most of all my confidence and knowing I'm able to play at the next level and contribute right away."

Coach Benitez looks forward to seeing Parrish play along side Jackson and Olojakpoke in 2017. "Akron is getting a huge upside [with Parrish]. Limitless potenial. Most importantly they are getting a high character kid who will represent Akron with a high standard on and off the court. I'm sure Antino and Emmanuel are excited in [Parrish] joining them."

Akron was the MAC regular season conference champion last season. They finished with a 26-9 (13-5 MAC) overall record and made an apperance in the NIT. Coach Keith Dambrot returns for his 13th season at the helm for the Zips and are lead by senior big man Isaiah Johnson. The Zips currently have one other commitment from the class of 2017: Jaden Sayles, a forward from Cincinnati, OH.